Open stunted forests with bushes and small trees having long roots and sharp thorns or spines are commonly found in the area where the rainfall is less than 80 cm.

The sea coast of which of the following states has become famous as a nesting place for the Giant Olive Ridley turtles from South America?

The sea coast of Orissa is famous as a nesting place for Giant Olive Ridley turtles from South America.

The climatic condition of Chennai is tropical savanna type where the average annual temperature of meterological station is 26°C and average rainfall is 63 cm and annual range of temperature is 9°C.

With reference to Indian transport systems, consider the following statements:

Which of the above statements are correct?

Indian railway is the fourth largest railway in the world after USA, Russia and China. National highways are nearly 2% (1.96%) of total roads.

The correct sequence of eastward flowing rivers of peninsular India from north to south is Subarnarekha, Mahanadi, Godavari, Krishna, Pennar, Cauvery and Vagai.

The approximate age of the Aravallis range is

The Aravallis range are the oldest mountains in India.

Consider the following statements regarding power sector in India:

Which of the above statements is/are correct? 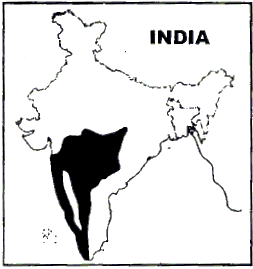 In the shaded area of the above map, the mean temperature for the month of July varies between

In the given map, the shaded area indicates the tropical wet and dry region.

Assertion A: Ganga plain is the most densely populated part of India. Reason R: Ganga is the most harnessed river of India.

The Ganga plain is the most important plain of India. The Gangetic plain covers more than a fourth of the country’s total surface.

Assertion A: The frequency of floods in north Indian plains has increased during the last couple of decades. Reason R: There has been a reduction in the depth of river valleys due to deposition of silt.

Siltation is the process of deposition of silt on the river bed through dam water.

Which of the following pairs of primitive tribe and place of inhabitation is NOT correctly matched?

Korba tribe in found in Chhota Nagpur of Chhattisgarh and Jharkhand.

Match the locations of the ports labelled as A, B, C and D in the given map with the names of those ports and select the correct answer. 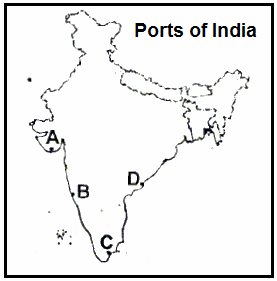 Which of the following statements is not true?

At which of the following positions of the moon shown in the diagram will the height of the ocean tide on Earth be the maximum? 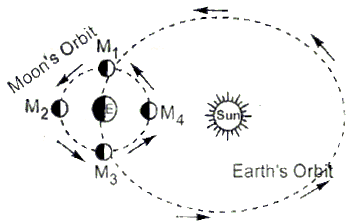 At ‘M4’, the height of the tide will be the maximum.

Ravva offshore block, with great potential for oil, is located in

Ravva offshore block is in Krishna—Godavari basin of Andhra Pradesh.

In the rough outline map of Jammu and Kashmir shown in the figure, places marked A, B, C and D respectively represent 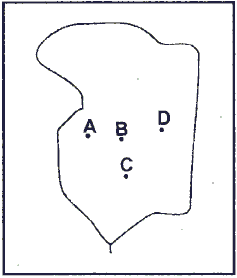 Which of the following pairs of state and tribe is not correctly matched?

Lambada tribes are found in Rajasthan and not in Madhya Pradesh.

The first marine sanctuary in India, having within its bounds coral reefs, mollusca, dolphins, tortoises and various kinds of sea birds, has been established in

In the given figure, the site of the Tehri dam has been labelled as 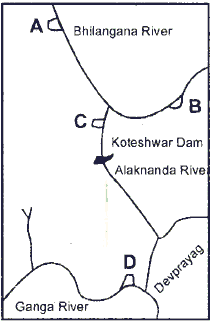 In the given map, the site of Tehri dam is “C”, which lies in Uttaranchal.

For proper ecological balance, 33% of forest land is recommended, but in India, we have only 20.14% of forest coverage.

“India has the largest population of the Asian X. Today, there are just about 20,000 to 25,000 X in their natural habitats spreading across the evergreen forests, dry thorn forests, swamps and grasslands. Their prime habitats, are however the moist deciduous forests. The X population in India is spread from north-west India where they are found in the forest divisions of Dehradun, Bijnor and National districts of UP to the Western Ghats in the states of Karnataka and Kerala and Tamil Nadu. In Central India, their population is distributed over Southern Bihar and Odisha. In the East, they are seen in North Bengal, Assam and a few other states.” The animal “X” referred to in this quotation is

Which of the following pairs of cities has recently been connected through a 6-lane express way?

Which of the following sets of states stands to benefit the most from Konkan Railway?

Among the Indian states labelled 1, 2, 3 and 4 in the rough outline map given below, the correct sequence in descending order of the percentage of scheduled tribe population to their total population is 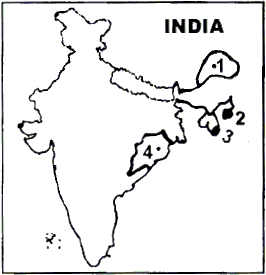 Which of the following is the correct sequence of the states (labelled 1, 2, 3 and 4) of India shown on the map in descending order in terms of available ground water resources for irrigation? 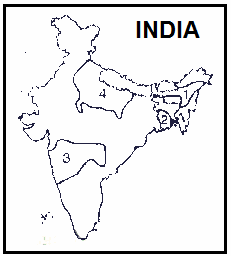 Some people in Manipur live in houses built on floating islands of weeds and decaying vegetation held together by suspended silt. These are called

Some people in Manipur live in houses built on floating islands of weeds and decaying vegetation held together by suspended silt. These islands are called “Phoomdis”.

The four railway junctions shown by numerals 1, 2, 3 and 4 on the given rough outline map of Gujarat, respectively are 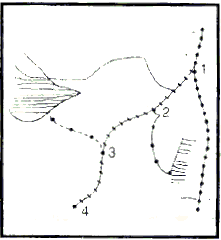